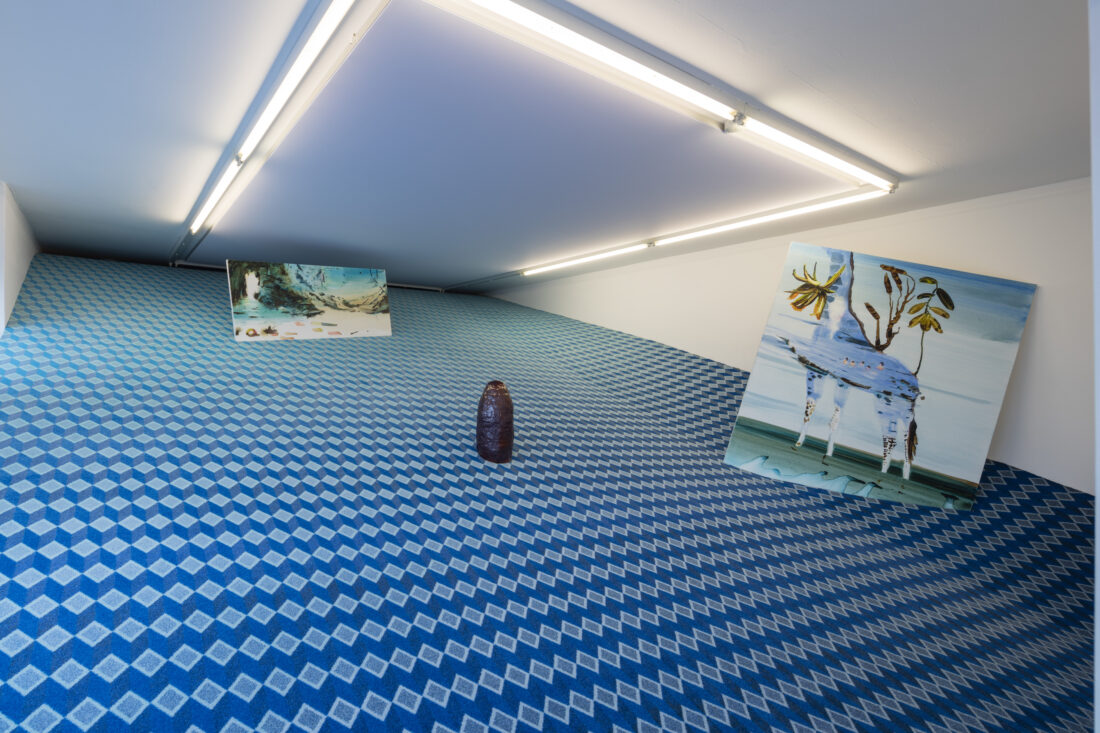 Bedrooms: perhaps the most curious of domestic spaces. In the end, the only thing that defines them is the presence of a bed. And this last is a space in which the average human being spends more than 30 percent of their life (1). It’s a space in which we feel the most safe and yet in which we are at our most exposed. Here, in John Kørner’s latest exhibition, there are five of them – the gallery becomes dormitory – their proportions articulating five individual presences (each bed representing a space for one body), each of which is presumably at some point (when asleep) totally unconscious of the presence of the others. The bedroom is a place in which people are at once present and absent, conscious or unconscious. More particularly, when the bedroom becomes a dormitory, the social set-up is rather like the experience of viewing an exhibition: you share an experience with other visitors but interpret that experience via thoughts that are (assuming a certain degree of self-determination and independence of texts such as this one) entirely personal and of your own; you’re invited to look at a specific object and be transported by thoughts and associations to somewhere else. Those are exactly the kind of contradictions upon which Kørner’s art thrives.

So, what does it mean to introduce a bed, not to be used – not our bed, not anyone’s bed – into the space of an exhibition, in which, on a good day, the viewer is expected to be an active participant, rather than a passive one (for, presumably, the artist is not assuming the experience of his paintings to be so soporific as to require the provision of sleeping facilities)? Placed in a gallery, in which, if we dream at all, we dream in a conscious fashion, the bedroom as a sleeping facility is something that is at once asserted and denied. The bedroom-ness of this space is a set-up, a manipulation, an illusion, but an insistent presence, a fact even, nonetheless. And the problem of living (or sleeping) together is the root of the problem of politics and social engagement itself. And John Kørner’s art is nothing if not social. If the body is an absent presence in Kørner’s installation, then it is a presence made visible in the painted works that are on show here. Indeed, in many ways it is one of the anchors (if it’s not too soon to get to nautical metaphors) of his work in general. The bed, the space for a body, surrounded by the artist’s ceramic works that is the centrepiece of the cage that constitutes his installation Prison (2013). The bed and the sleep it facilitates is a human right (and hence the denial of sleeping facilities a form of torture) – even for those incarcerated – indeed, a bed is the one object a bailiff has to leave even a person crippled by debt.(2)

The human body and the violence done to it more dramatically forms the base for War Problems (2008–), the artist’s series of paintings commemorating every Danish soldier to fall during the war in Afghanistan (to which Denmark sent a total 9,500 soldiers between 2001 and 2013, the 43 killed constituting the highest loss of life per capita of any of the coalition forces). Each of the paintings in the series (at the first iteration of the project in 2008, there were 16 works) is titled with the fallen soldier’s first name, as if to redeem the individual from the collective. On the one hand the series expresses the post cold-war politics of globalisation (along with some of the shock that came when our the promise of a globalised capitalist utopia turned out to be rather more messy than seamless), the role of the media in representing, even normalising conflict and its outcomes (images of the bodies of dead soldiers were banned by the Danish Army Control Centre), and on the other, it provides a reminder that within all that is the presence of individual bodies and the individual human lives they contain and make manifest. As with Blue Bedroom, there is a confrontation, not as comfortable as the title of the present exhibition might suggest, between the represented and the real.

Indeed, many of the bodies represented among the paintings on show in Blue Bedroom appear to be variously out of control: drowning, flying, falling (or all of the above in the case of Sea Greetings Man, 2016) or collapsed in drunkenness (Drunks on the Delphi Ruins, 2016). As with many of the artist’s paintings these offer fractured narratives (3): why has the figure in Falling Down from a Bench, 2016, collapsed in such an uncomfortable fashion, and does the open window above his head have anything to do with it? It’s a feeling of uncertainty and liminality that reappears in the beachy scenes in paintings such as Gathers the Threads or Reaches for a Window and more bizarrely still in Running at Mars (all 2016). It’s an uncertainty and liminality that is the classic fabric of dreams and their interpretation.

Or else, assisted by the thin washes of paint and resolutely flat surfaces that constitute the artist’s signature painterly style, the bodies we see are not all there: The Waterfall (2016) that is the subject of that painting appears either to be decorating the sweatshirt of a man who is hitching up his trousers to wade into some blank and empty sea, or it is contained within his body like some kind of internal vision or, even, given his immanent confrontation with a body of water, a paranoid fear. For the setting of John Kørner’s Blue Bedroom does everything to encourage a reading of the works in terms of the psychology of the unconscious: from the contemporary evocation of cinematic blue screens onto which backgrounds are placed to set the scene for actors’ actions, to surreal collaged imagery such as the bathers immersing themselves in a sea contained within the outlined body of a giraffe (Bathers in the Giraffe, 2016), only the speckled legs of which seem to have any degree of solidity or stability. ‘All that is solid melts into air,’ the dreamer might think, ‘all that is holy is profaned, and man is at last compelled to face with sober senses his real conditions of life, and his relations with his kind.’ (4) Before worrying, perhaps, that he has merely become like the drunks slumped over a plan of the Delphic ruins, unsure of where they lie, but presumably dreaming that they are anywhere other than here. Does manifesting yourself as something else or somewhere else equate to not being yourself? It’s an aspect of artmaking that lies at the heart of all its pleasures and its pains.

But somewhere else is also, naturally, where the rest of Kørner’s installation takes us. The floor under those beds contains a representation of a beach, a beach, which gives way to the surf of a sea, that in turn rises up (not unlike the artist’s 2013 installation Tsunami) to engulf the final room of the gallery in a blue wave. As if all this art business, all this white cubery could simply be washed away. It’s here, but not here, and everything art asserts can be denied. “To sleep, perchance to dream – ay, there’s the rub.”(5)

(1) For more on beds and bedrooms, see Perec, Georges, Species of Spaces, 1997.
(2) Ibid.
(3) There is in this notion, of a fractured narrative, a connection between Kørner’s painting and the work of Jacques Monory, one of the foremost painters of the French ‘figuration narrative’ movement of the 1960s, whose work was inspired by the rise of cinema and the framing of film. For Monory too ‘the blue of dreams’ (as filmmaker Jean-Jacques Beineix, describes it) is a favoured aesthetic. ‘This fragmentation is life,’ the painter said in 1992. ‘To recreate a movement out of fragments corresponds to a reflection on ourselves. It’s surely good that this creates tension and relaxation. When there is no more tension, or a drop in tension, as it is with electricity, we no longer see anything. Obviously, we must return to a total image with a unity: everything is blue, for example’. Coincidentally, Monory’s studio has a blue door, John Kørner’s painting of that title does not. See Duponchelle, Valérie, ‘Jaques Monory, le film noir de la peinture’, Le Figaro, 11 December
2014.
(4) Marx, Karl & Engels, Friedrich, The Communist Manifesto, 1848. Sometimes obviously, at other times not, there is a politics that haunts Kørner’s work.
(5) Shakespeare, William, Hamlet, Act III, Scene I, c. 1599–1602. There is, of course, a morbid connection to sleep. 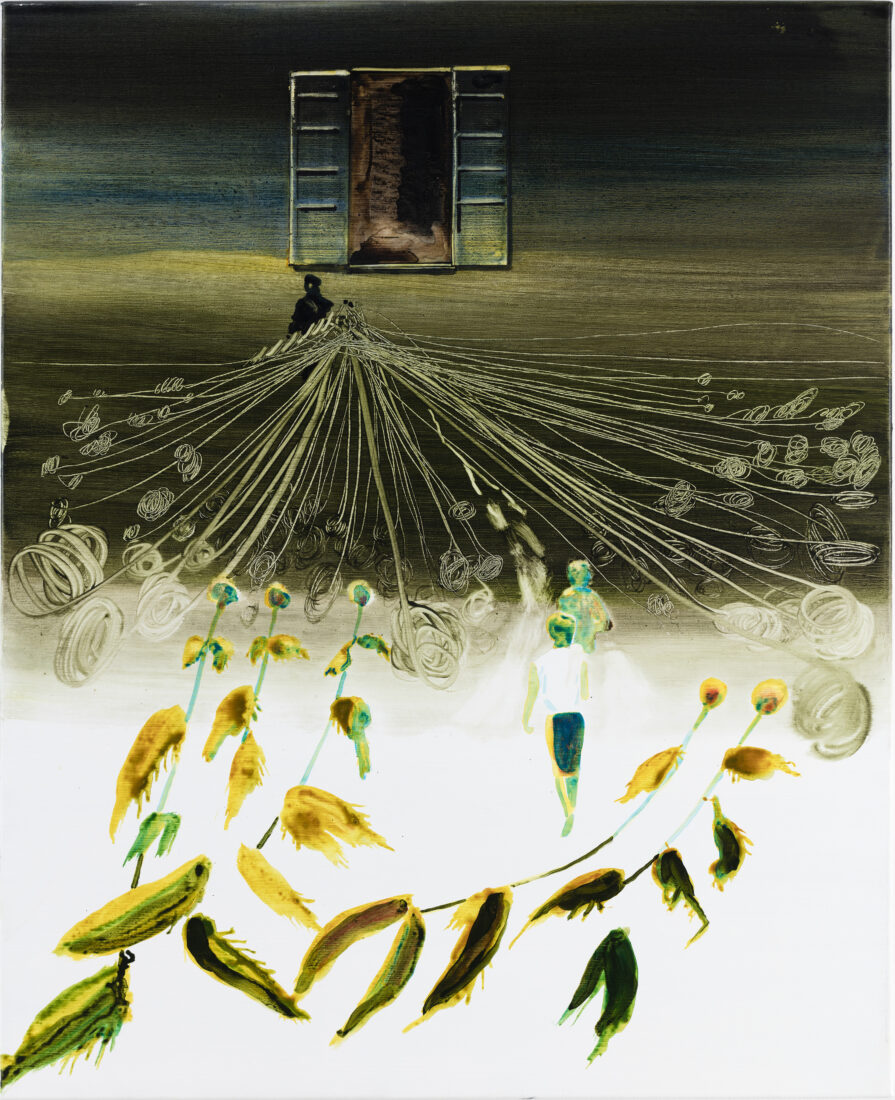 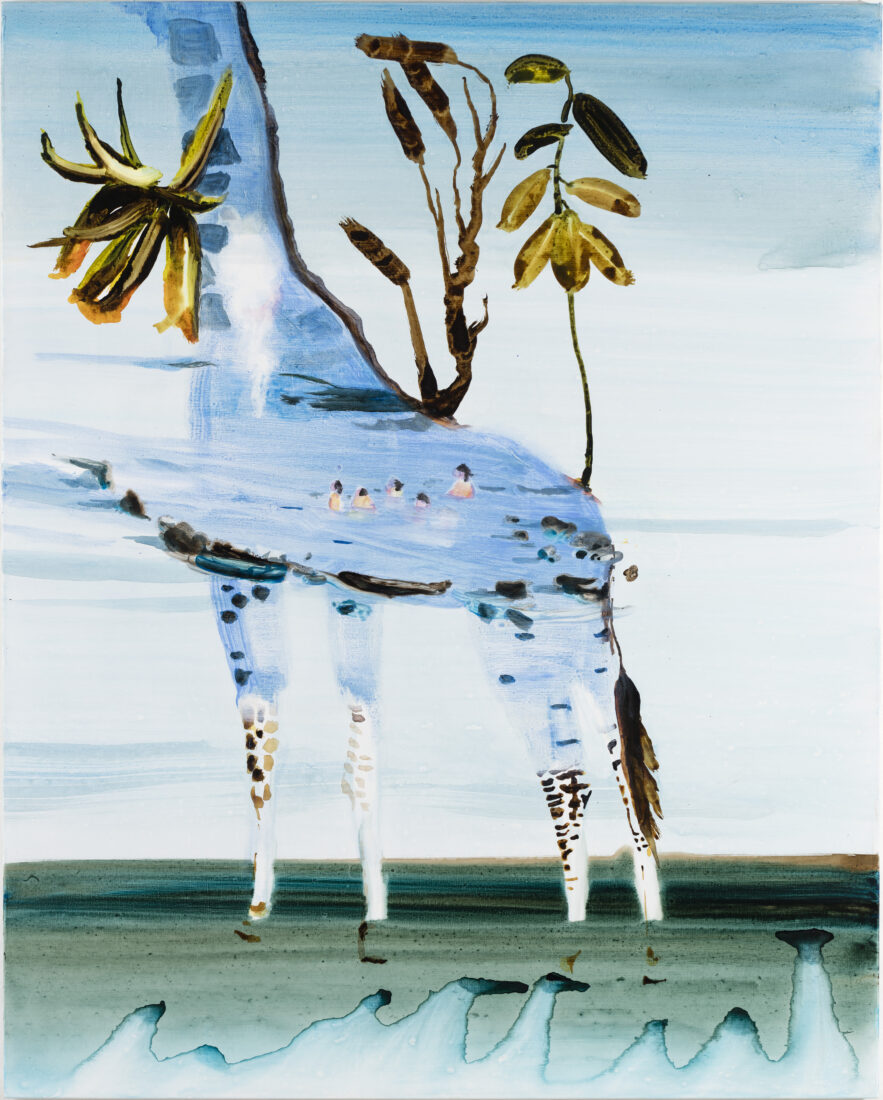 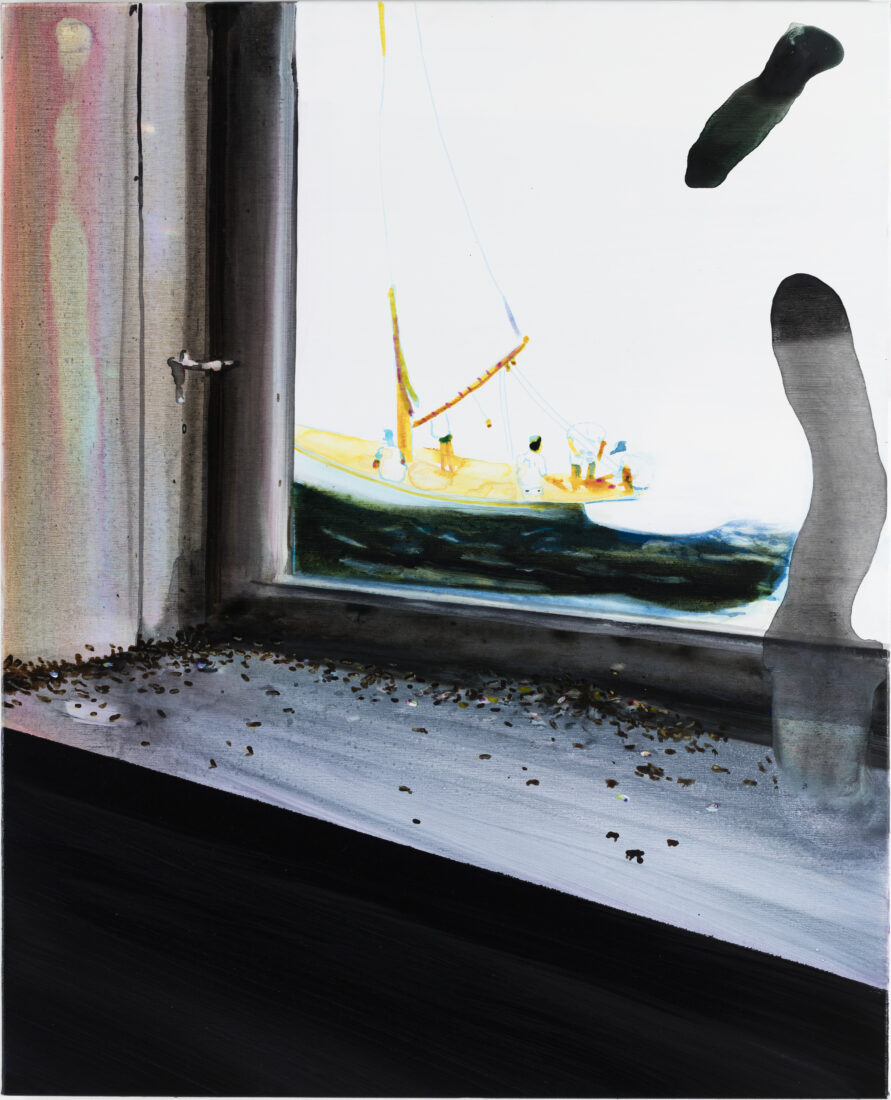 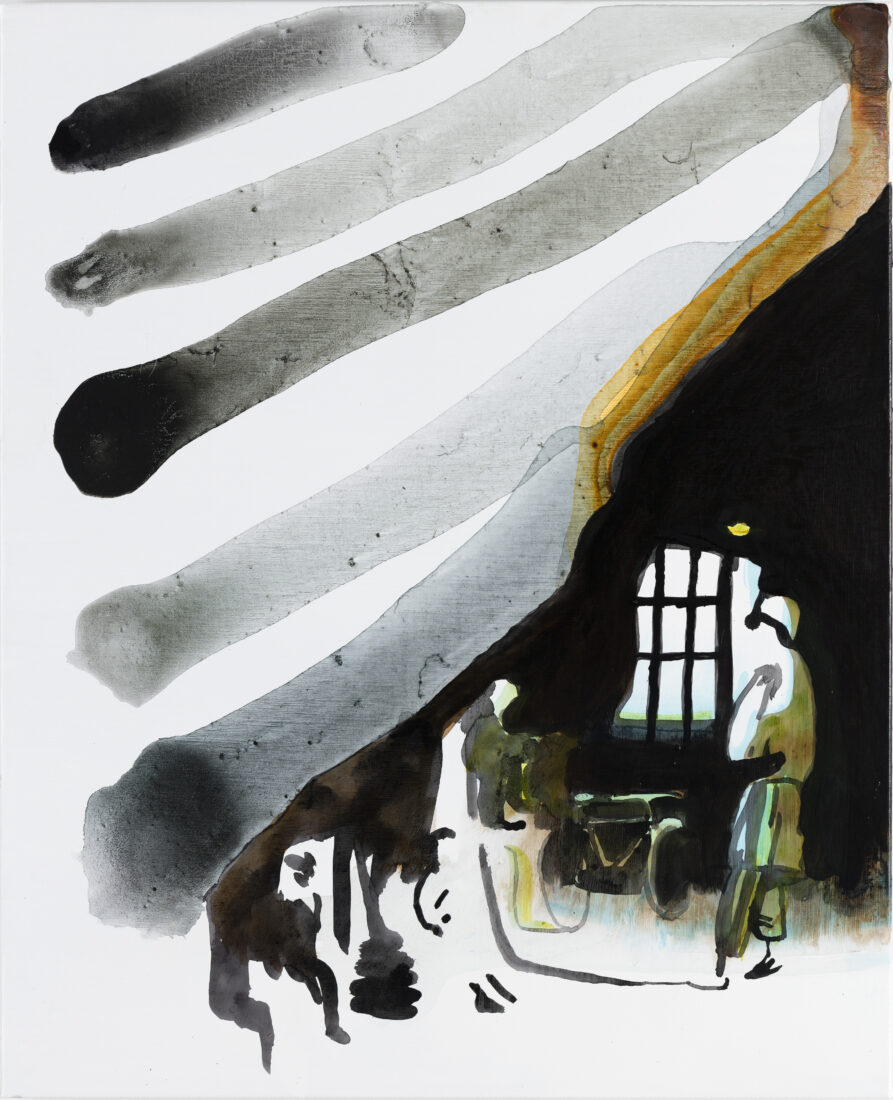 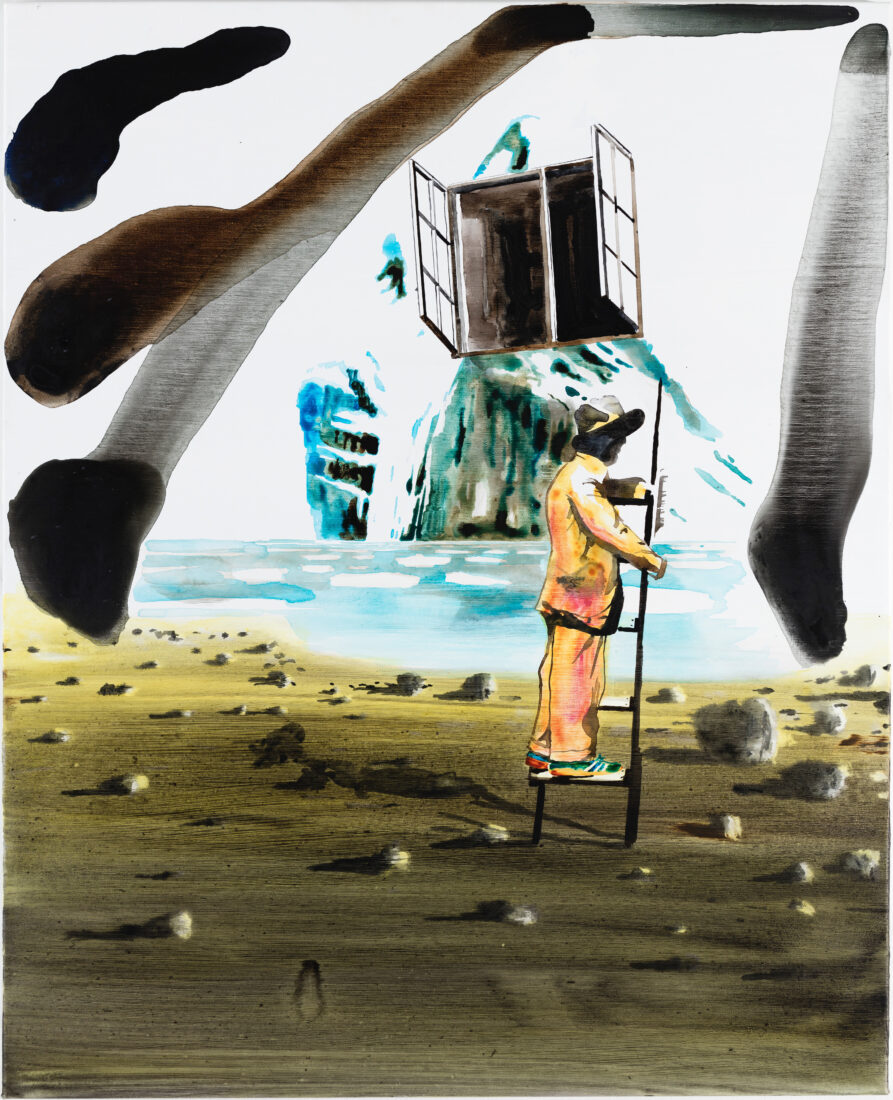 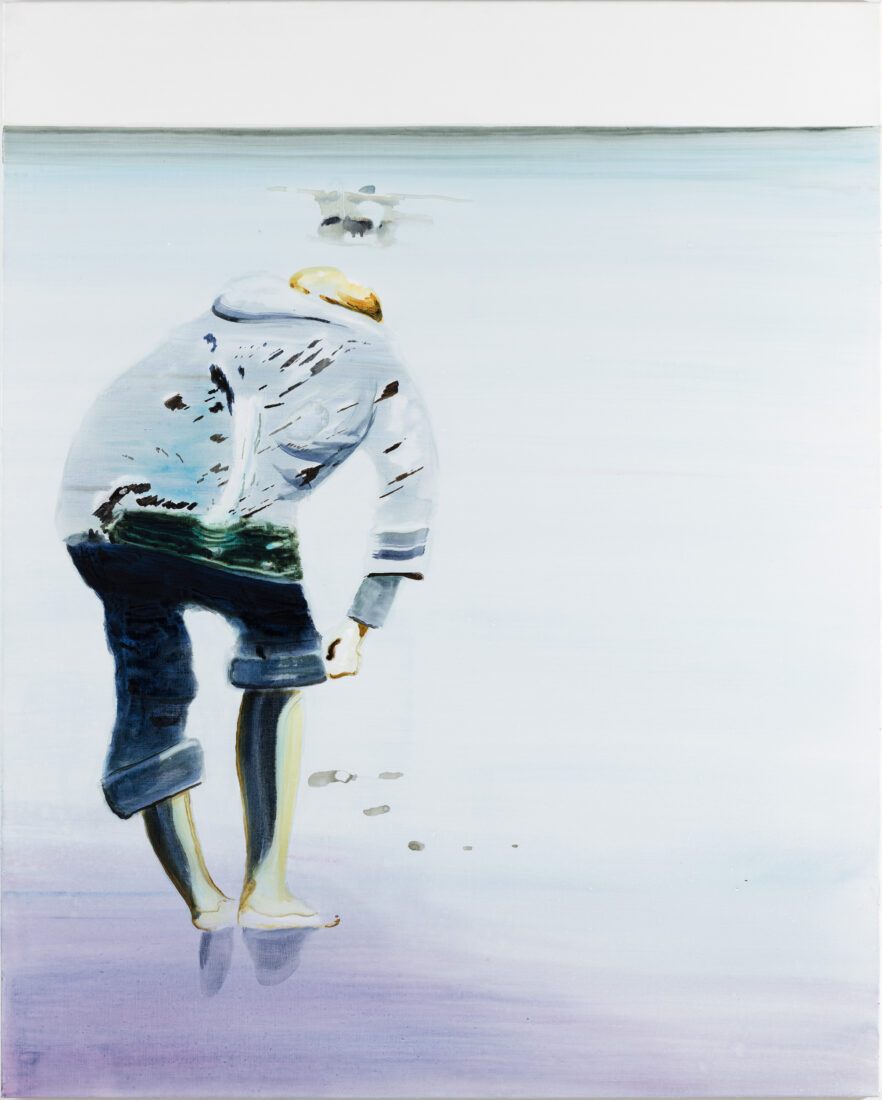 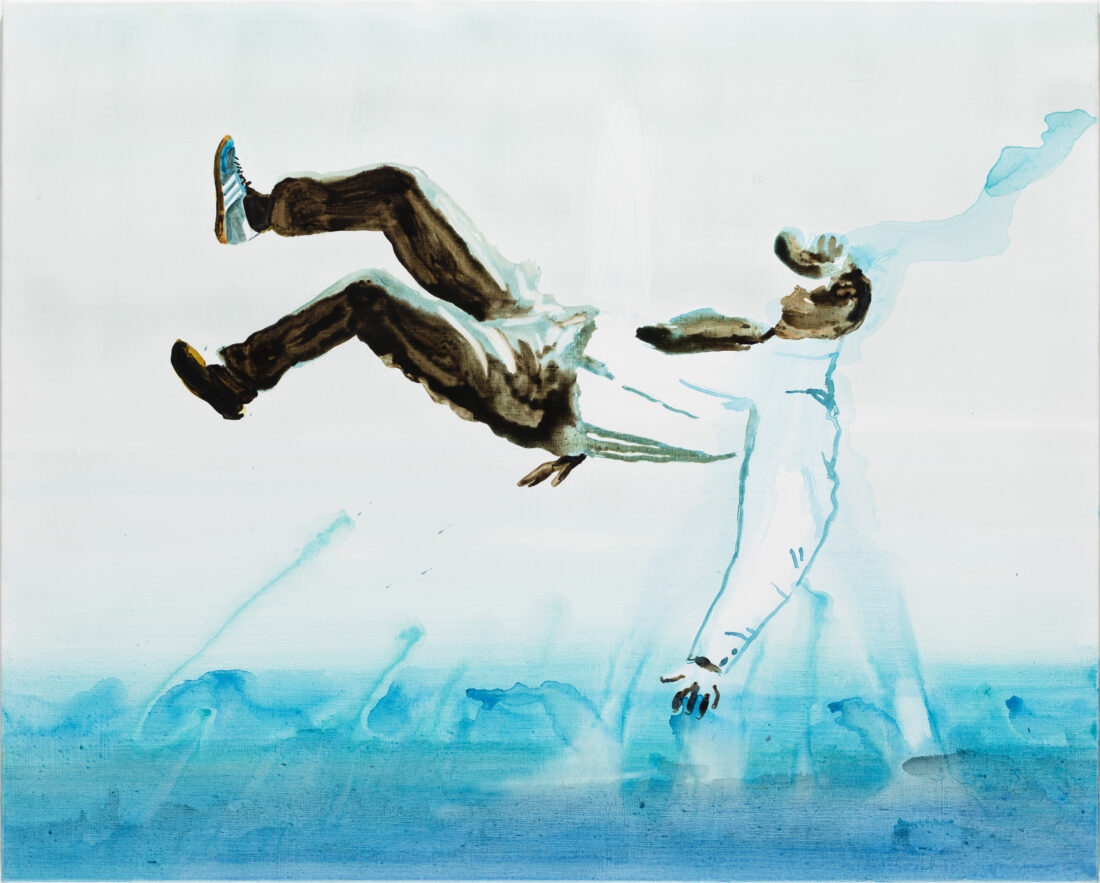 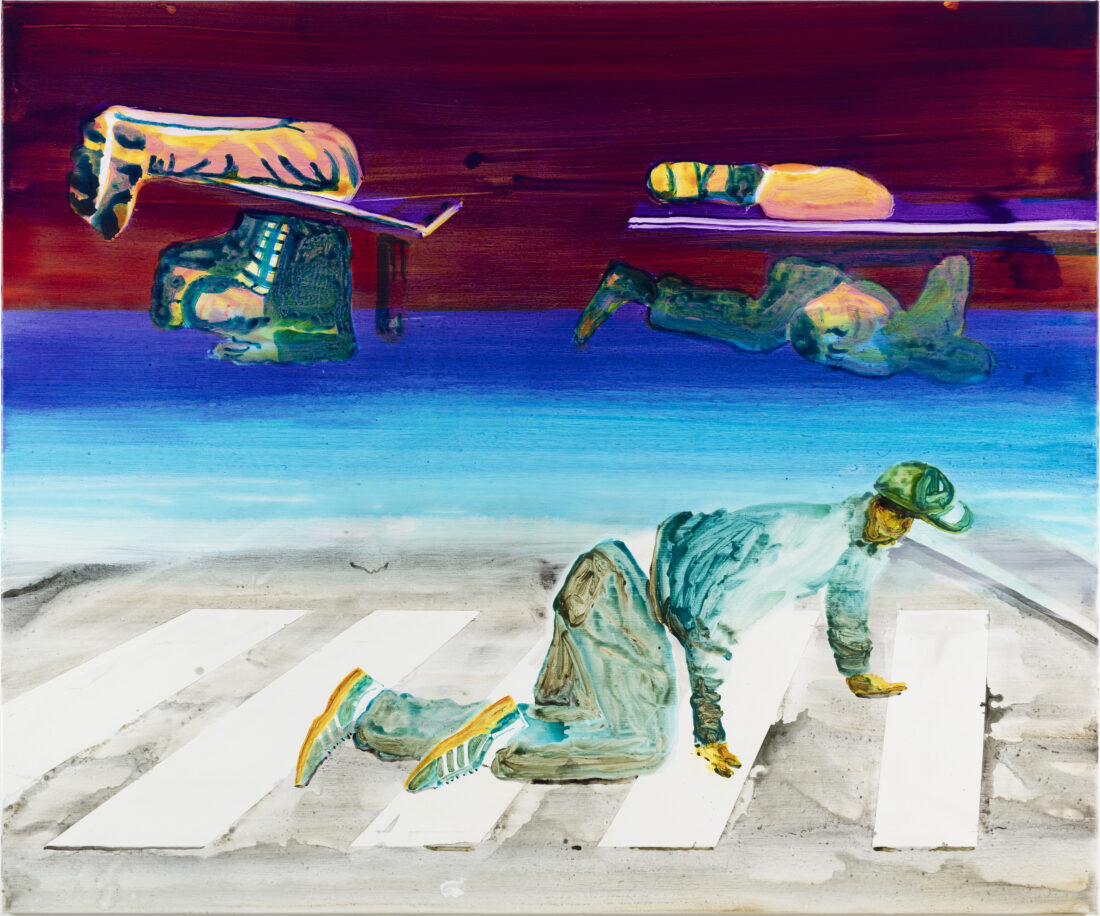 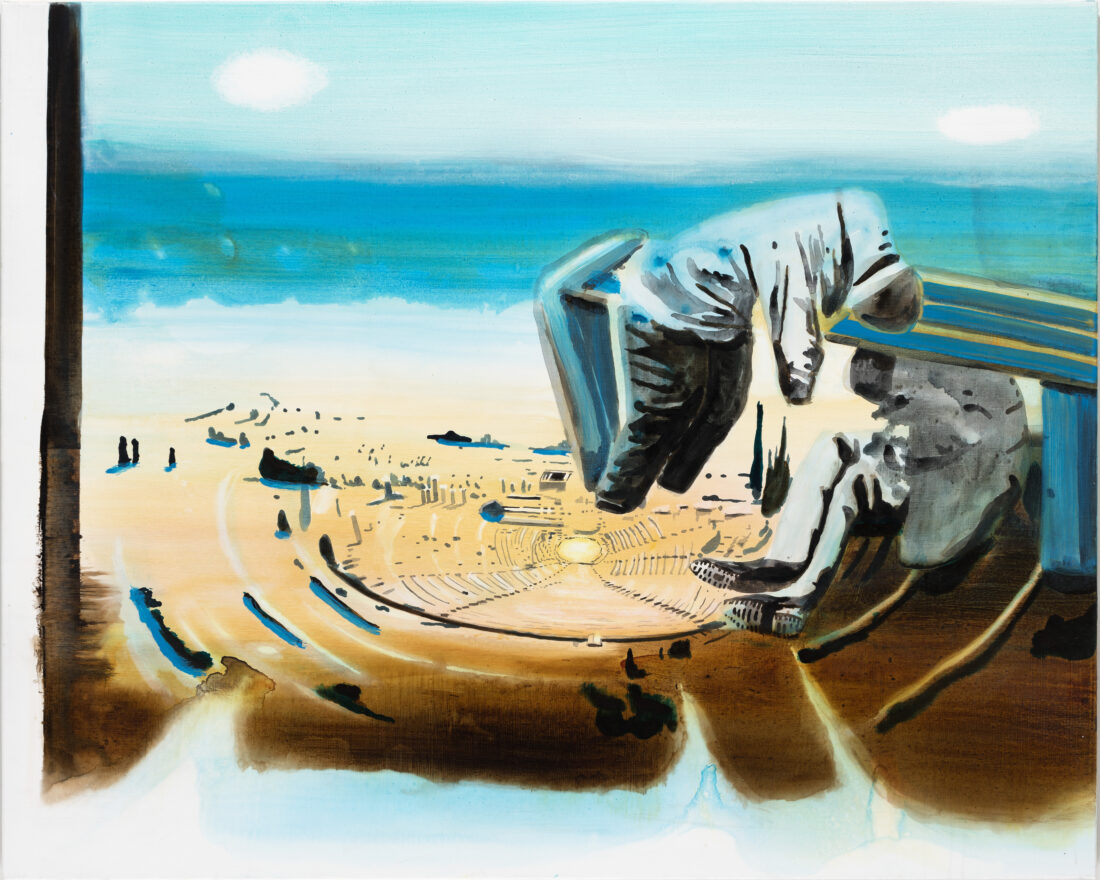 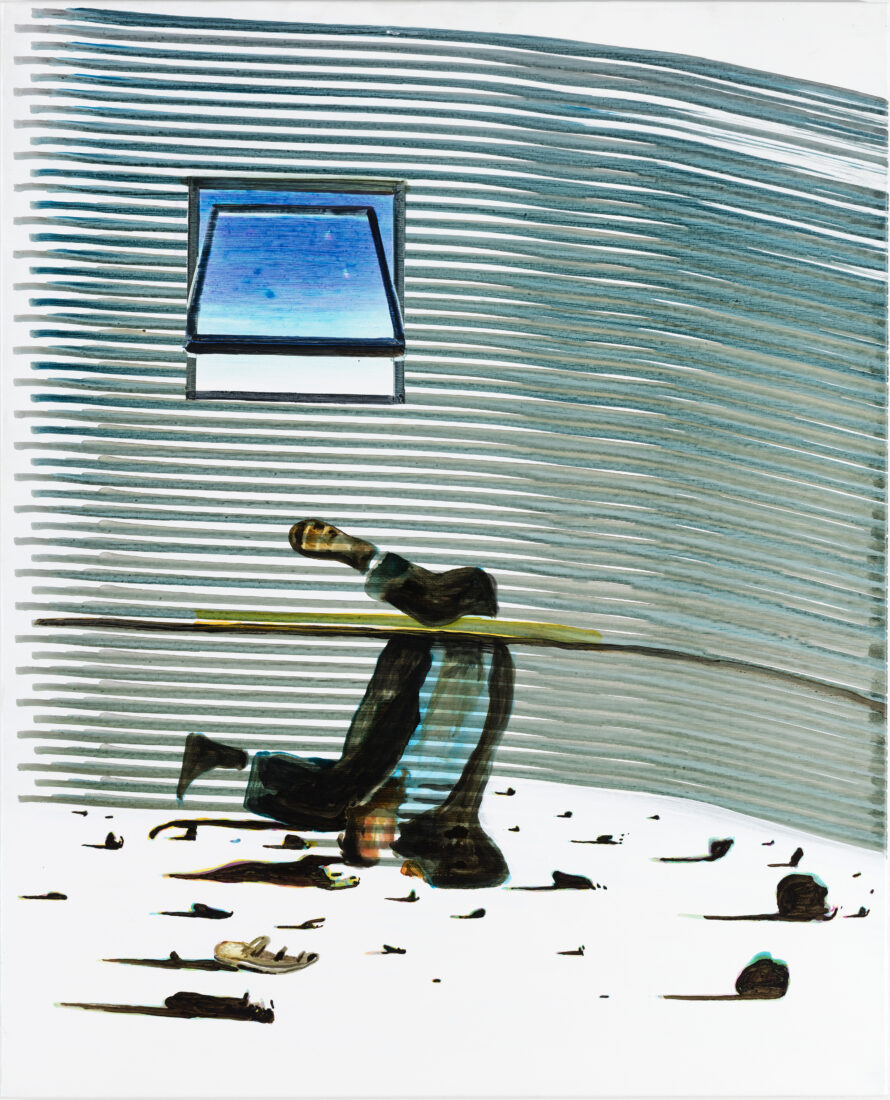 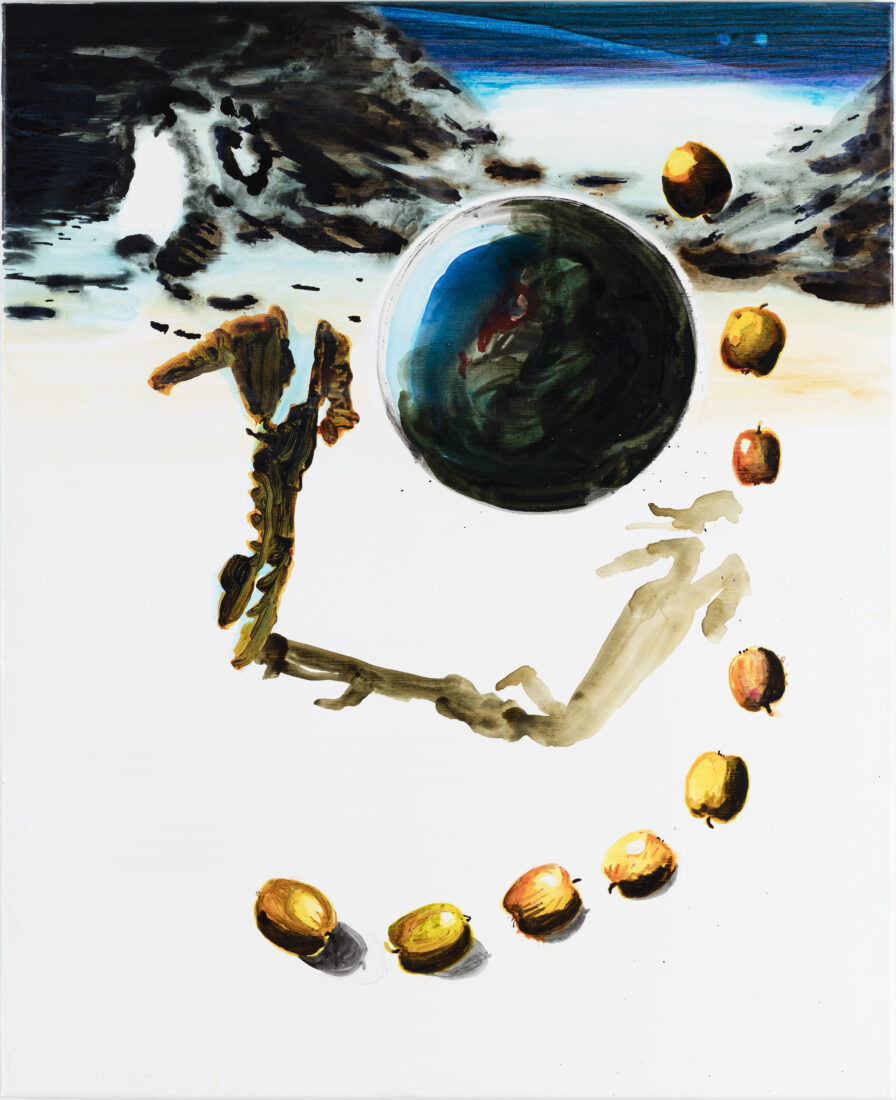 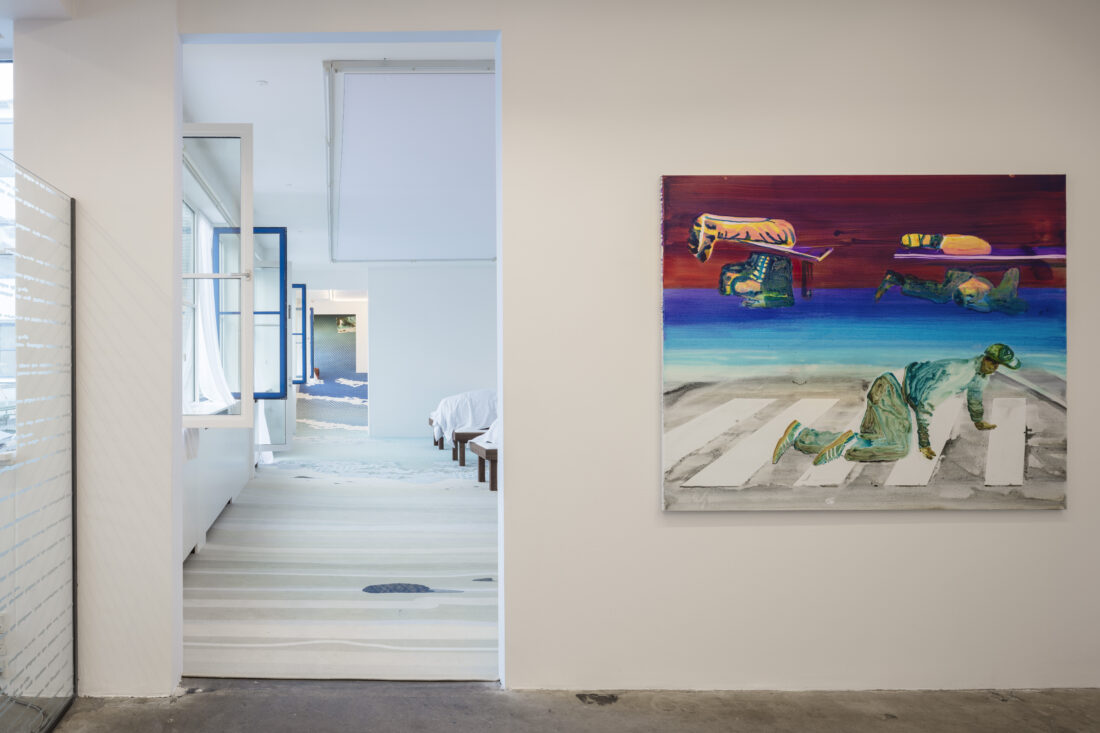 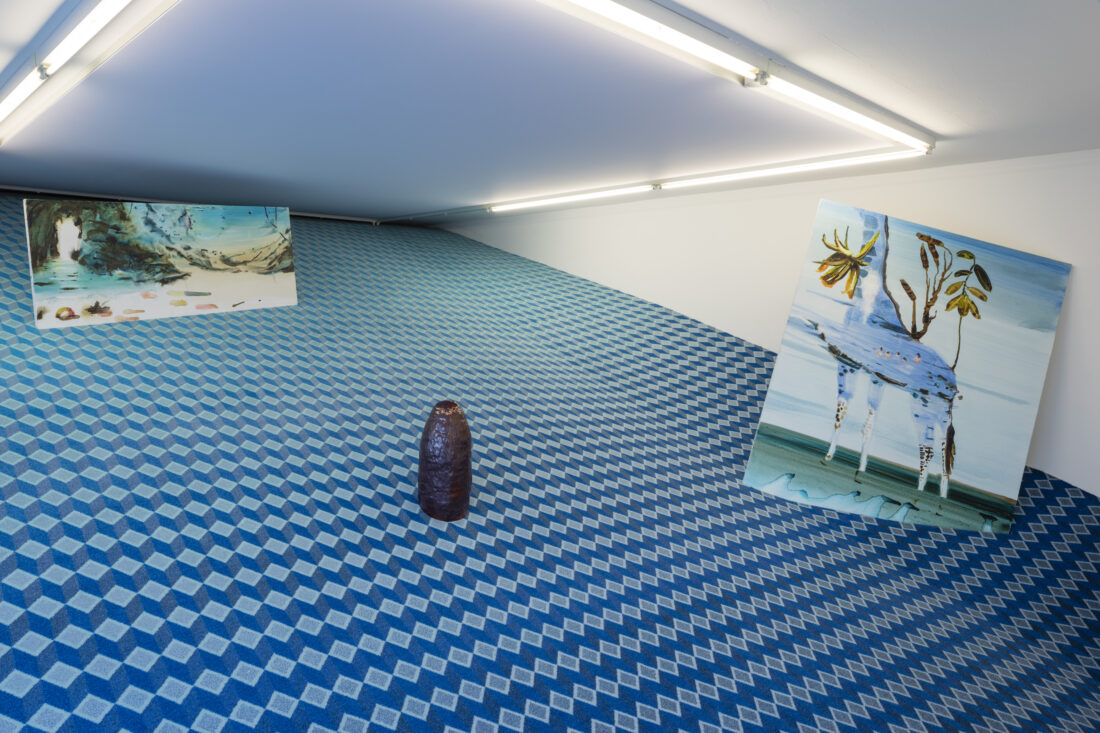 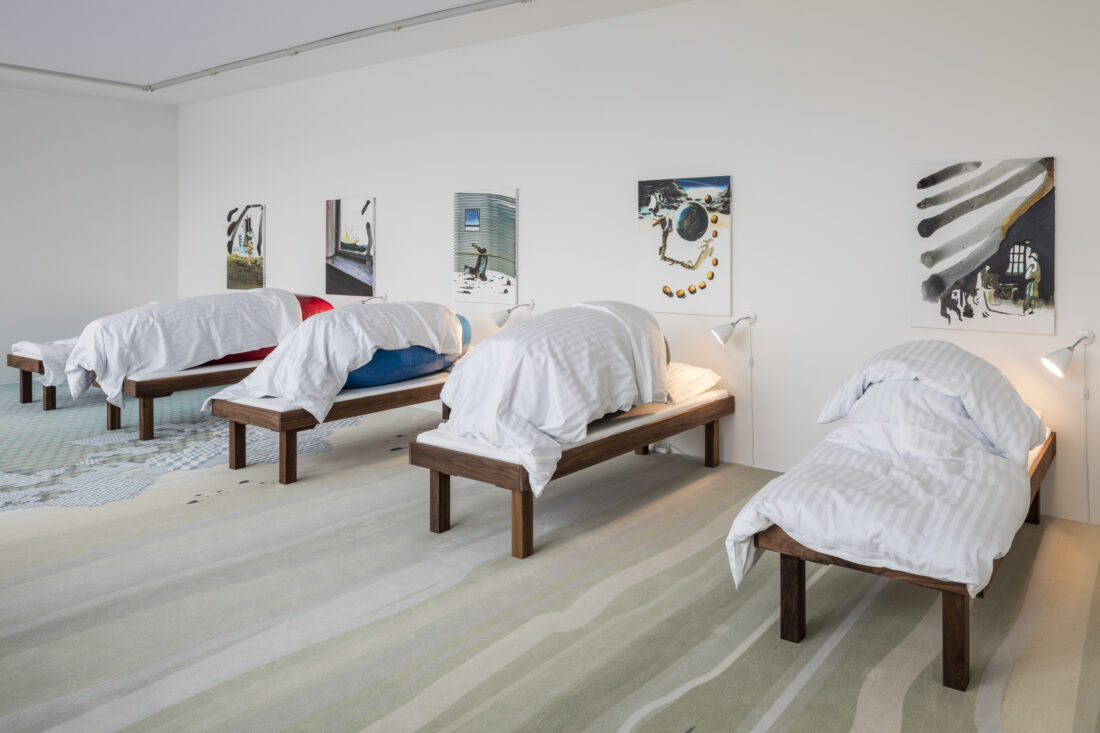 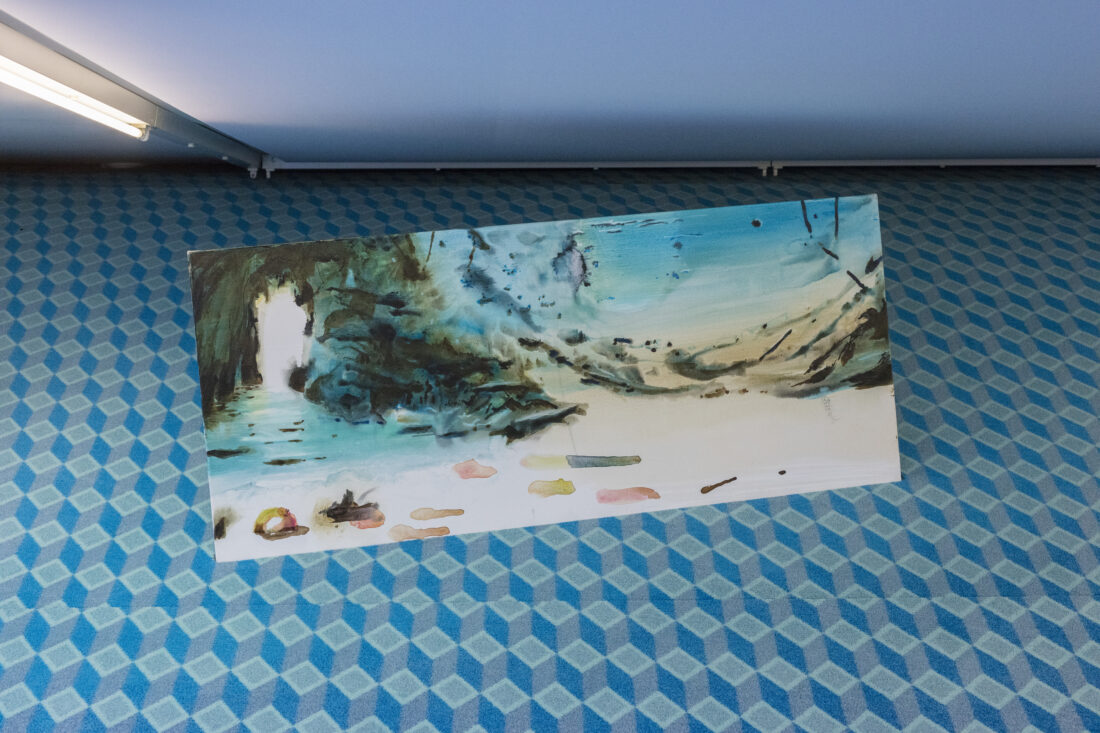 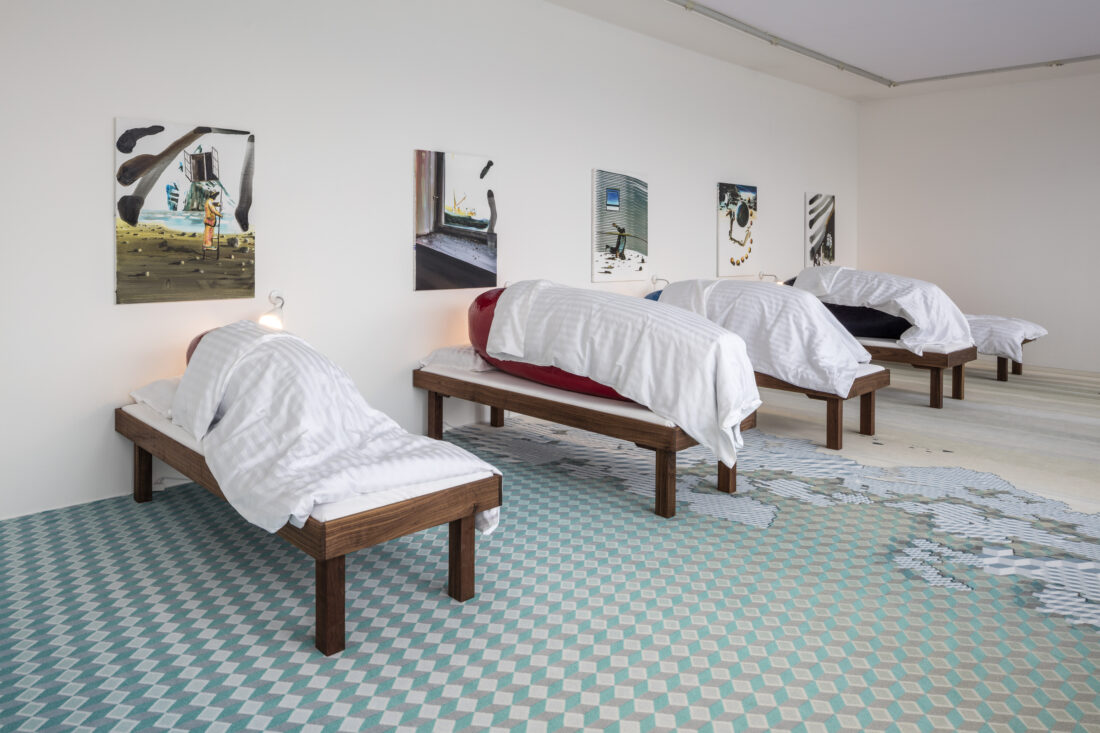 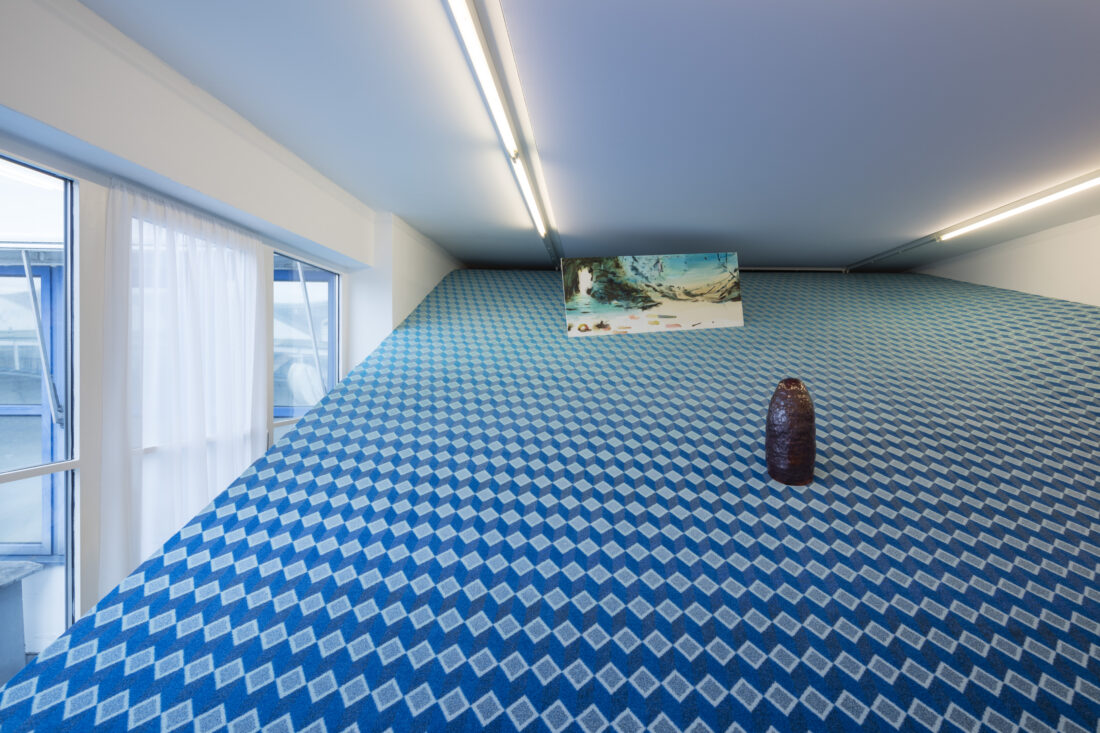 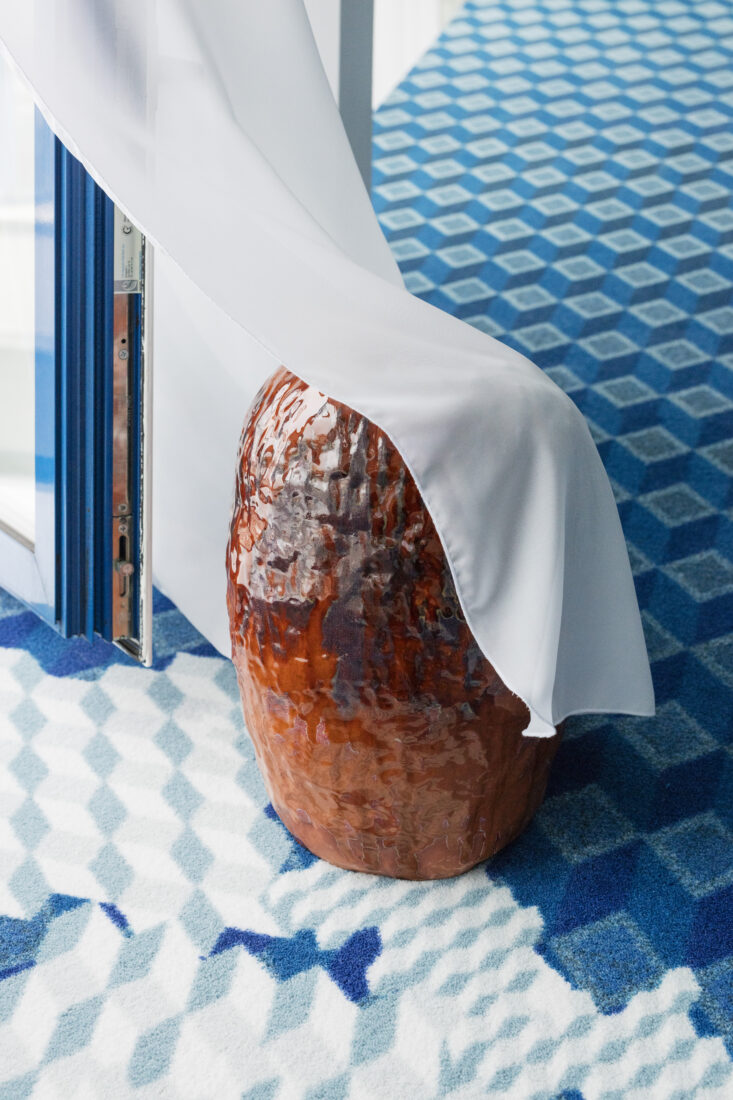 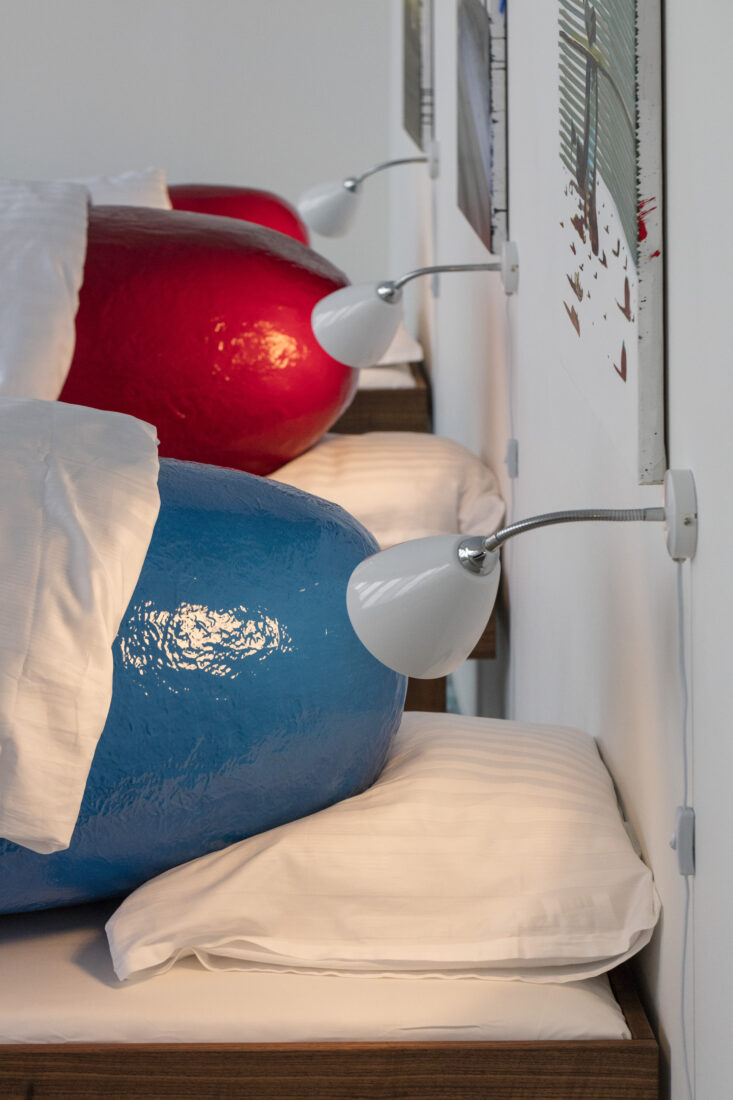 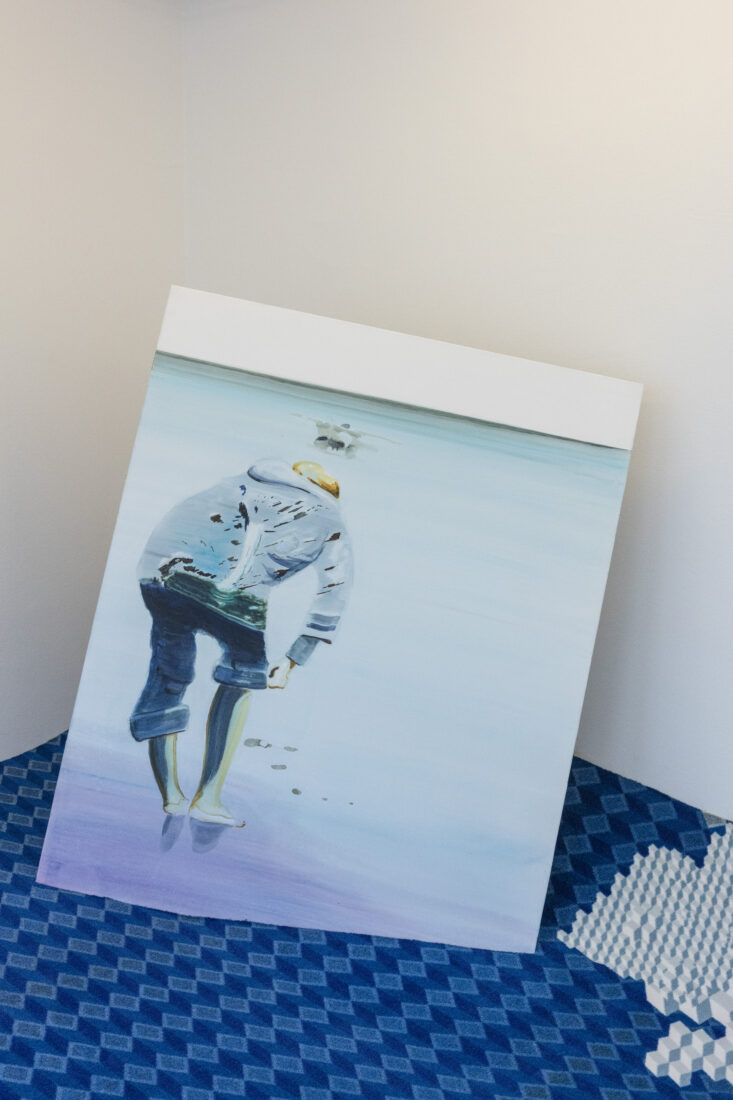 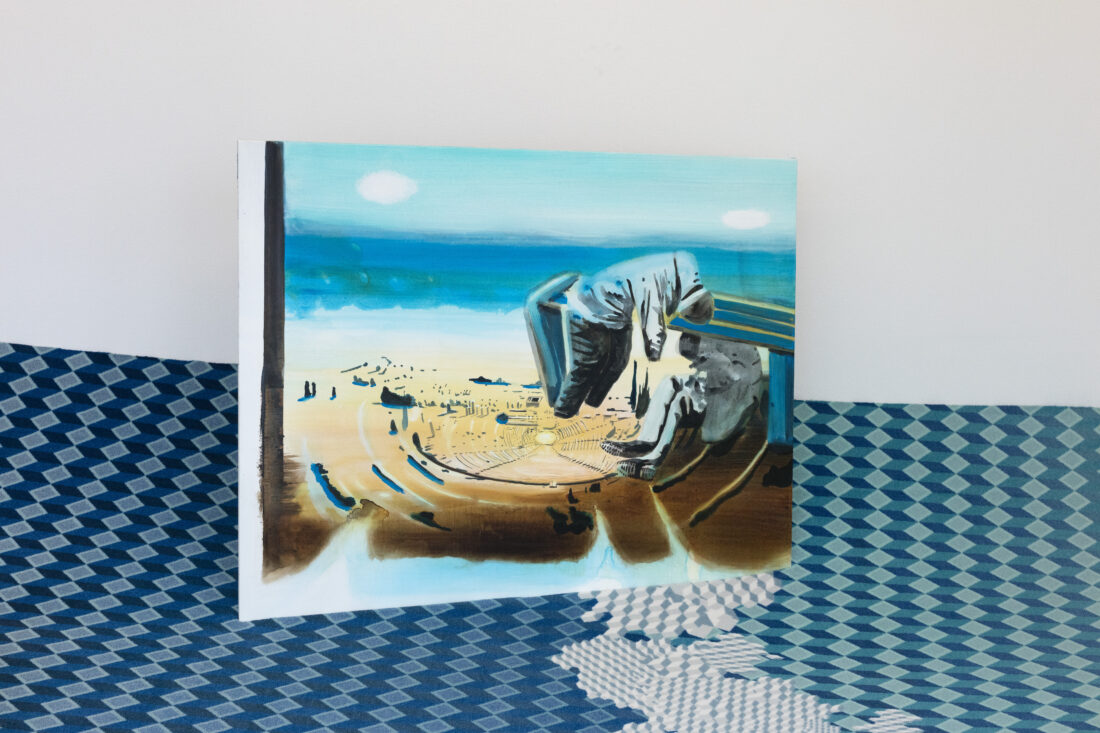 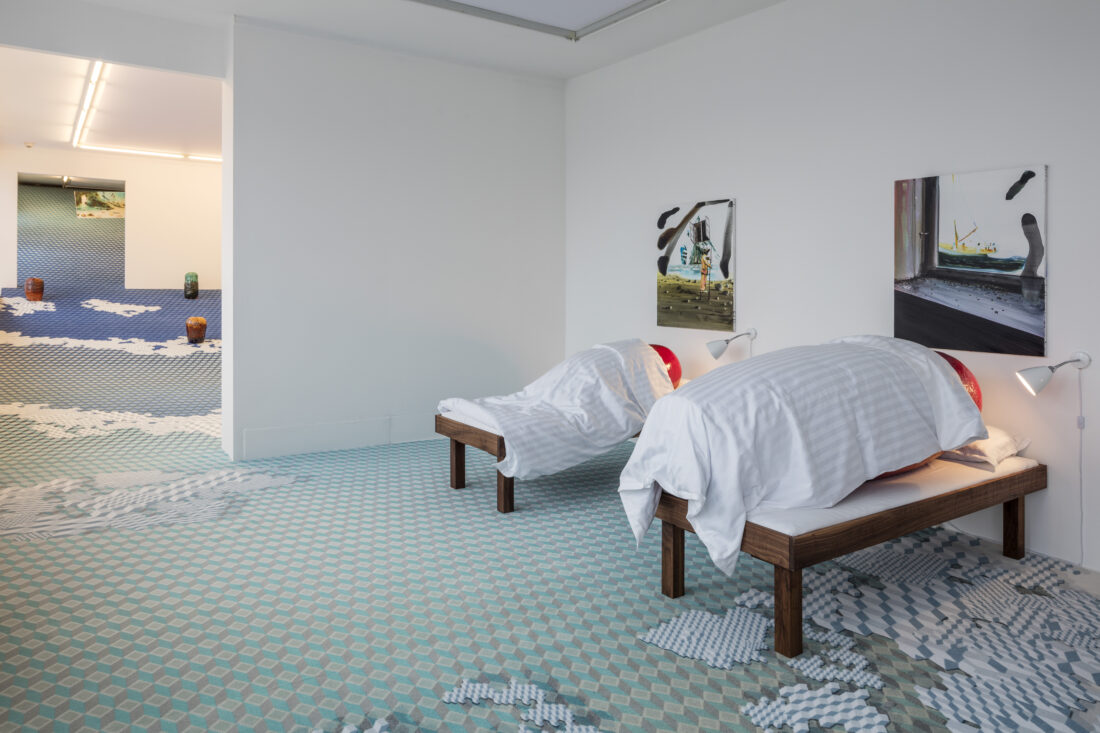