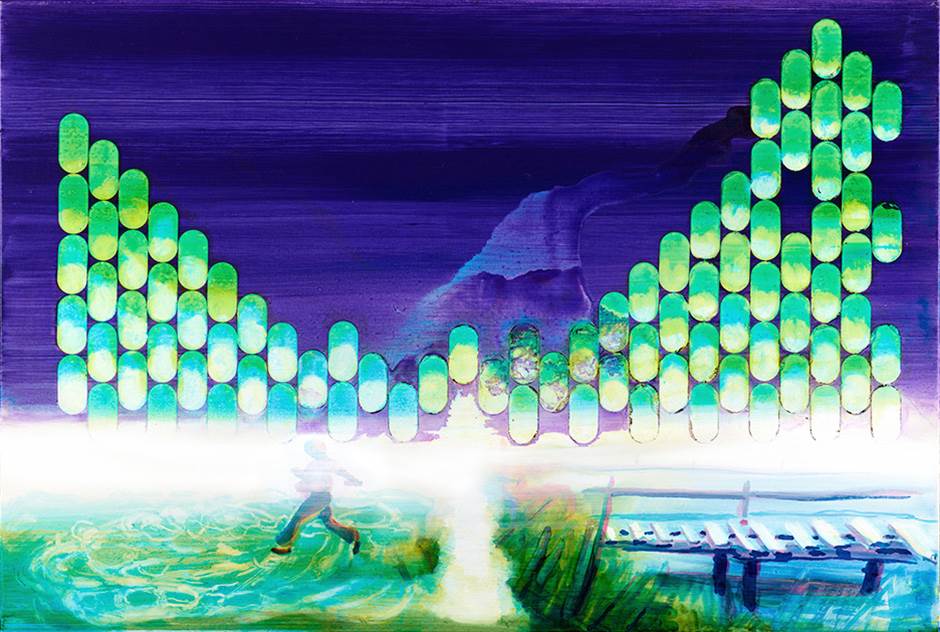 Though it began life in Rodgers and Hammerstein’s 1945 musical ‘Carousel’, You’ll Never Walk Alone has long been associated with football. A terrace anthem adopted by followers of clubs across Europe but rooted in the culture of Liverpool FC it stands, above all, for solidarity – in the face of trials on the pitch and, as highlighted by the 1989 Hillsborough stadium disaster and its repercussions, tragedy on a far-reaching scale.

John Kørner admires the song greatly and it’s not hard to see why its heartfelt sentiment and simple, rousing beauty strikes a chord with the artist. Over the past few years, Kørner has created a series of works that reach beyond the personal, beyond the confines of the art world, to address contentious subjects in the public arena.

Allied with a deeply principled, though never crusading, sensibility, Kørner’s art is one that engages with the problems of the world and of representation, whether in War Problems, the 2008 series in which Kørner addressed head-on the human cost of Denmark’s involvement in the ‘War on Terror’ in Afghanistan, or in a more recent series drawing attention to the plight of prostitutes in Denmark.

If this new series of paintings is dedicated to anyone, it is, as the artist puts it, to ‘people who have a problem performing in their life’. The statement, of course, could refer to any of us at some time or another, and that seems to be its point. You’ll never walk alone… can painting, like a song, offer hope?

The figures in the Kørner’s new paintings aren’t alone, not really. A Technicolor beach scene is shared by a sunbather and a cyclist – so far, so Danish. And yet, engaged in separate activities, self-contained, the figures aren’t really of the same world. Further attempts to interpret the painting in terms of pictorial logic are frustrated. The image starts to wobble, like a novice cyclist, before veering away from definable reality.

Motifs – and it’s worth remembering that, for Kørner, motifs are problems in themselves, part of both the real and metaphysical worlds – start to melt. The cyclist’s head could be captured mid-explosion. The aqueous quality of the paint makes the image seem as intangible as a reflection in water.

There are a lot of references to water in the exhibition Fallen Fruit from Frisland. A series of aqueous paintings is presented as part of an installation that features a carpeted floor, rising wave-like against one wall, and a simple wooden boat made by the artist’s great-grandfather.

The exhibition title refers to Frisia, a coastal area that extends across the Netherlands and Germany to the Danish border. Until the construction of canals during the 1920s and 1930s, this low-lying district, also known as Friesland, Fryslân and Frisland, was flooded for much of the year. In this mutable landscape locals made their farms on top of artificial hills, using boats to travel from field to field. It was here that Kørner’s great-grandfather plied his trade as a boat builder. Many decades later the artist discovered that a small wooden rowing boat made by his ancestor had been preserved in a museum.

Transported to London, the ancestral vessel functions as a poetic anchor point for paintings that ask us to consider our relationship to the ever-shifting rhythms, flows and tides of the natural world. On an initial viewing, Kørner’s new paintings appear to mark a departure from previous works, such as War Problems, or the fields of hazard yellow populated by abstract and figurative forms in 2006 Problems.

Smaller in scale, and often deceptively simple in composition, these works seem to spring from a quieter tradition of landscape painting. Canals, trees, houses… it may appear as if these scenes were born in the sleepy ateliers of Northern Europe in the seventeenth century. Yet, in Kørner’s hands, landscape becomes an arena rich with transhistorical currents, almost hallucinatory with interminglings of the personal and philosophical. Everywhere, past and future, the familiar – like a reassuringly gnarled apple tree – and the defiantly unfamiliar collide. The work encourages musings that can seem contradictory: on the one hand the scenes depicted in the paintings are apparently open, easy-going; on the other the work seems freighted with awkward questions about representation, knowledge, faith. It speaks unquestionably to our own moment.

Here, the artist’s signature use of watered-down acrylics chimes with the work’s elemental subject matter. In several images rural idylls appear vulnerable against washes of paint that, like the seas surrounding Frisland, threaten to overwhelm them – it’s hard also not to think of the tsunami that devastated part of north-eastern Japan in 2011.

In several images figurative elements co-exist with more abstract forms that, functioning along the lines of the ovals and curlicues in earlier Problem paintings, appear as a kind of pre-thought. In two canal paintings, these nascent forms proliferate, agitating the sky. We might think of them as viral, perhaps even architectural, their cell-like shape seeming to denote both a natural code and, en masse, a structure that brings to mind a kind of floating sci-fi city, recalling sources as varied as Jonathan Swift and Buckminster Fuller.

In one painting we see figures walking through an orchard while apples drop from the trees. These are the fruits referred to in the exhibition title, an allusion to the beliefs of hard-line fruitarians who eat only that which has fallen to the ground (and also, we assume, a nod to Isaac Newton and Adam and Eve).

What to believe in, or not, is always at the forefront of any consideration of Kørner’s art. In Fallen Fruit from Frisland a romantic idea of the sublime meets a contemporary form of painting that arrives with doubts about the medium built in. Acknowledging the power of landscape painting without ever appearing wistful for a time when it was predominant, or unquestioned, Kørner delights in summoning the instantly nameable – tree, canal – even going so far as to flirt with cliché. But, crucially, he always leaves space for ambiguity, some extra work for eye and mind to do; it is surely no accident that those apples resemble thought bubbles.

It is no accident either that Kørner makes reference to a landscape that over the centuries has been under constant attack from the elements, endlessly renewed, one that is now as manmade as it can be said to be natural.

Covered in a geometrically patterned carpet, a manmade ‘wave’ greets viewers to this exhibition. This breaker, part Hokusai’s Great Wave, part skateboard ramp, is a grandiose theatrical element designed to accentuate the drama of looking and thinking about the natural world as depicted in these paintings. Kørner’s ancestral boat, by contrast, is utilitarian, humble, freighted with sweetly personal associations. Considering these elements together we come up against some of the problems of representation that have preoccupied Kørner throughout his career – chief among them being the problem of channelling experience into art and back out into the ‘real’ world, whatever we may take that to mean, so that it resonates with a wider audience. Looking inside the boat we encounter a series of small ceramic forms that function like the repeated, cell-like shapes in the paintings. The artist also refers to these nubs of clay as Problems. Perhaps, though, like the apple that falls from the tree, they might be thought of as gifts. After all, one person’s problem is another’s possibility.

What the exhibition captures is a sense of genesis, the ebb and flow of creation in a dance with rhythms terrestrial and, as intimated by a mesmerising blue painting that reads like a stop-frame animation of the phases of the moon, celestial. In the end, perhaps Kørner’s art might itself be regarded as a kind of vessel (the apple never falls far from the tree, as the saying goes), one that transports us across the bright, choppy waters of representation, from the known world to a more enigmatic place where the unexpected, inexplicable, or miraculous can occur. The gallery may be a public place. The journey, though, is best taken in solitude. You really have to be alone. 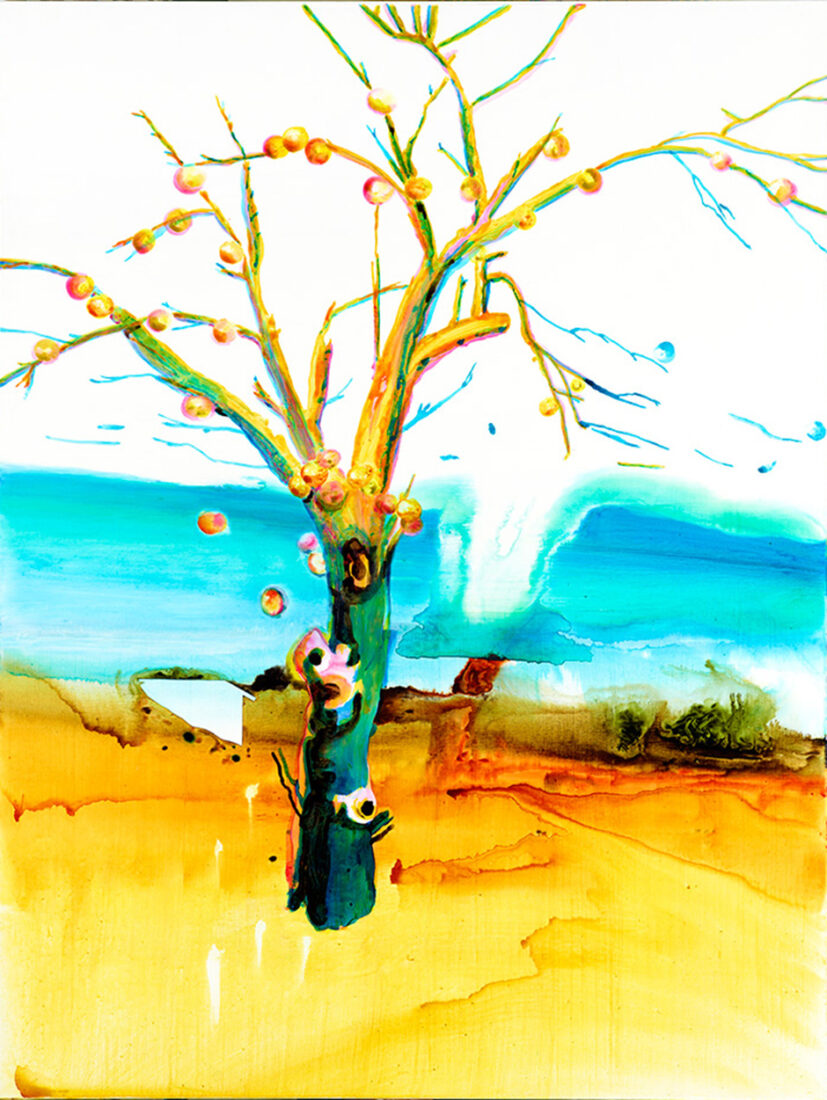 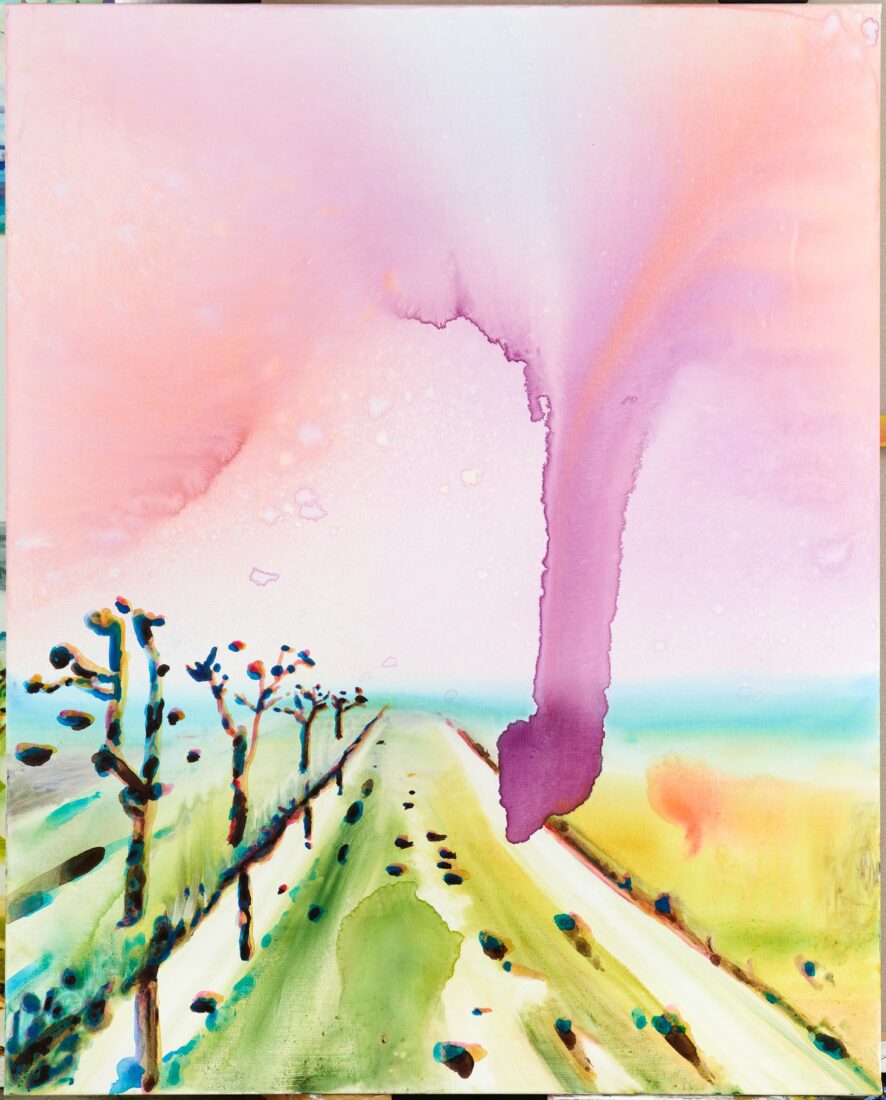 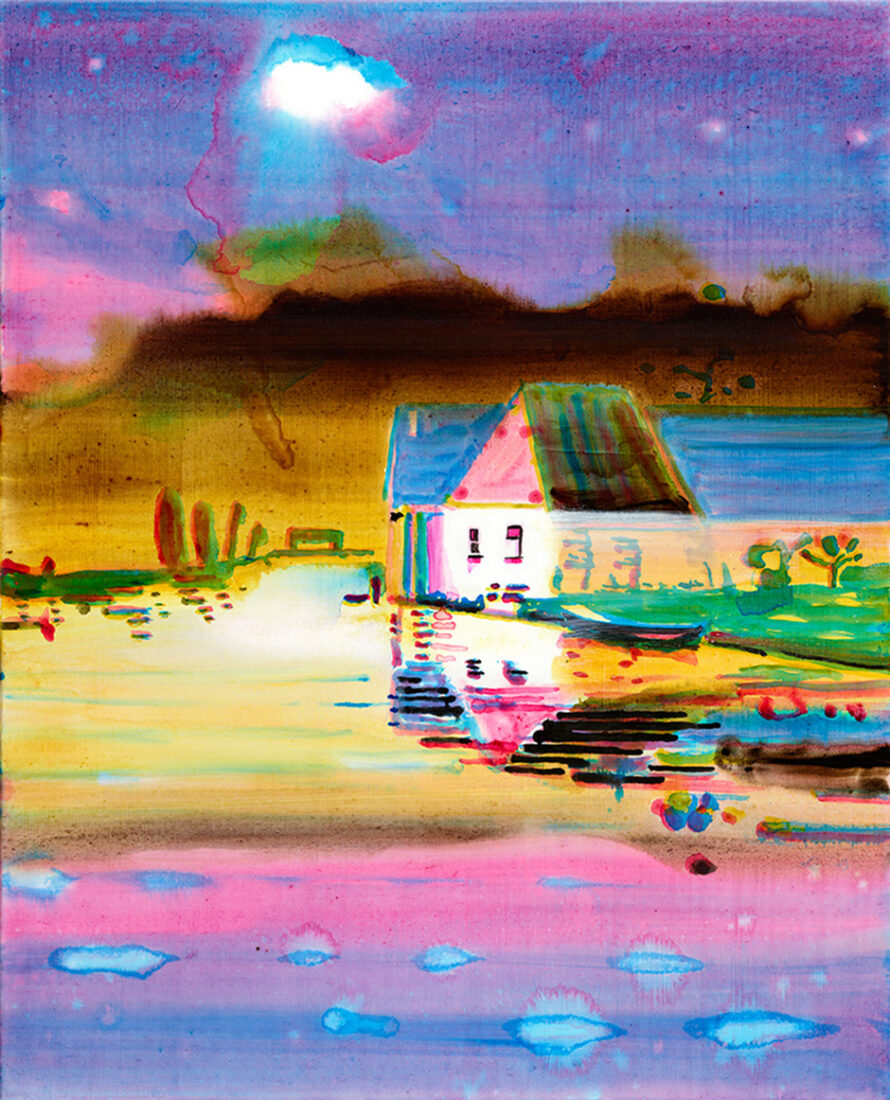 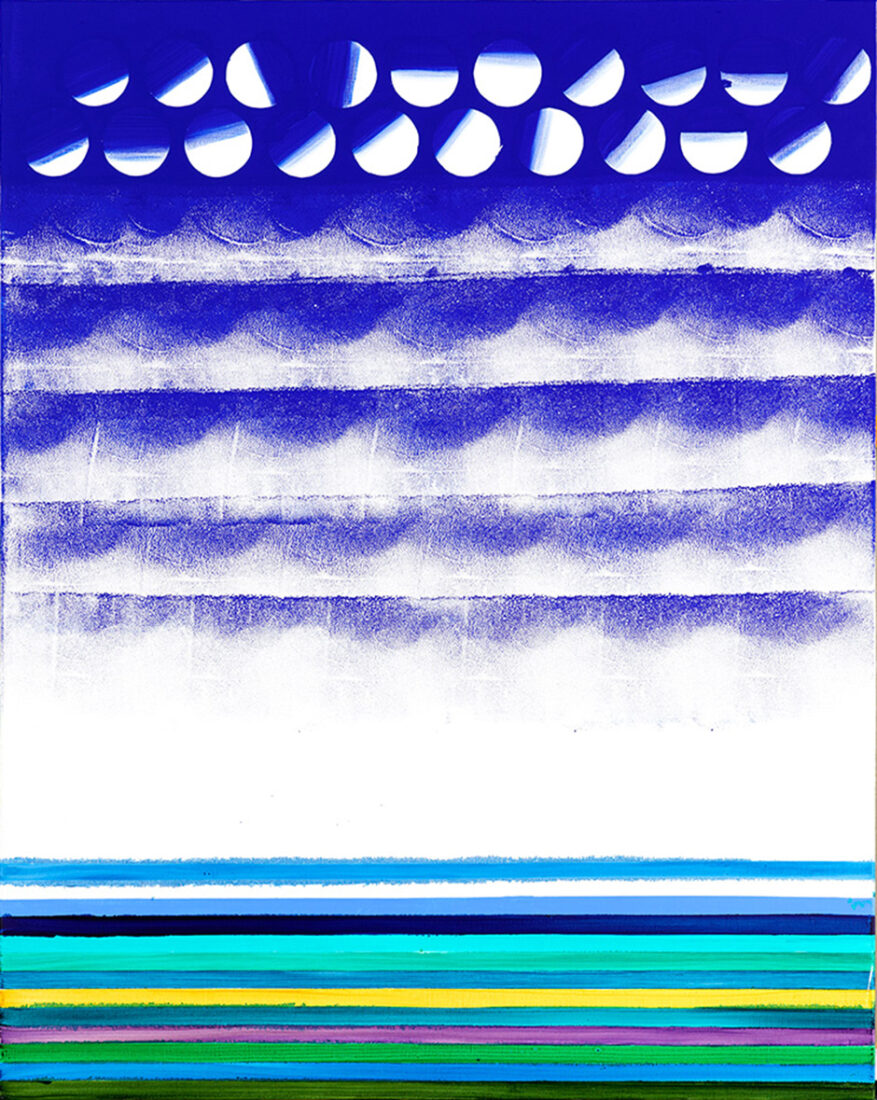 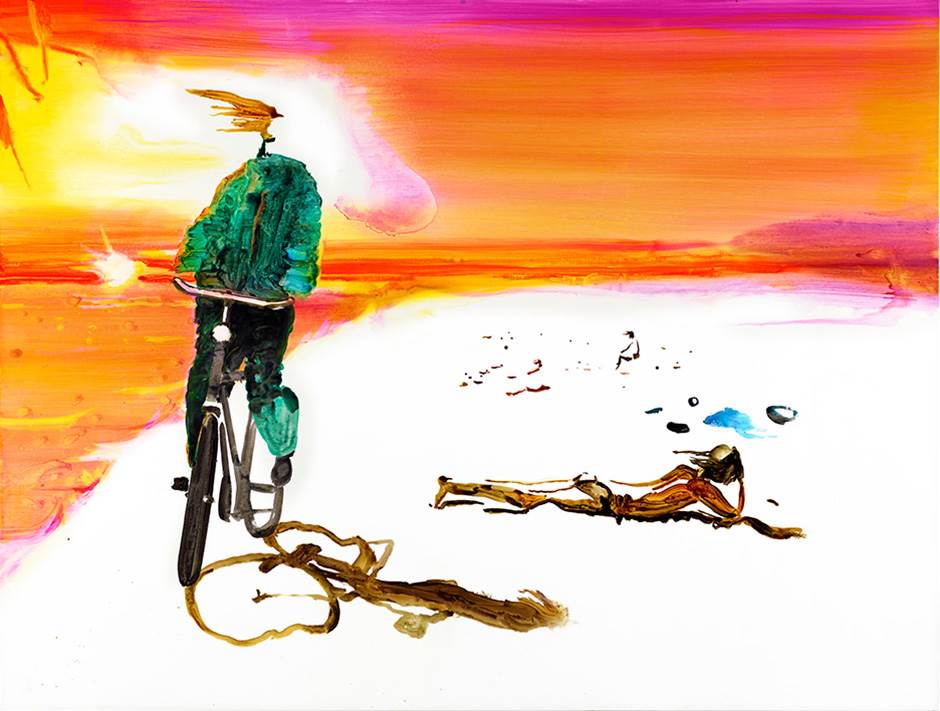 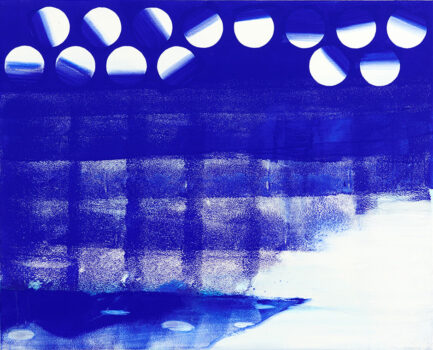 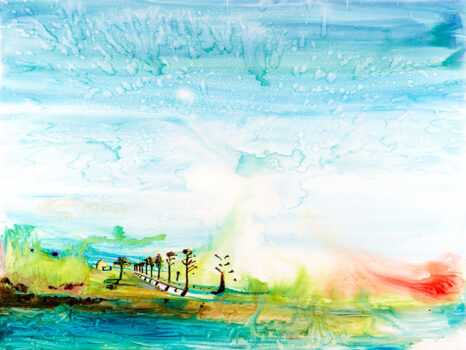 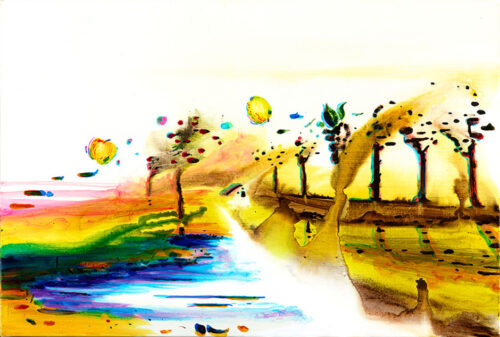 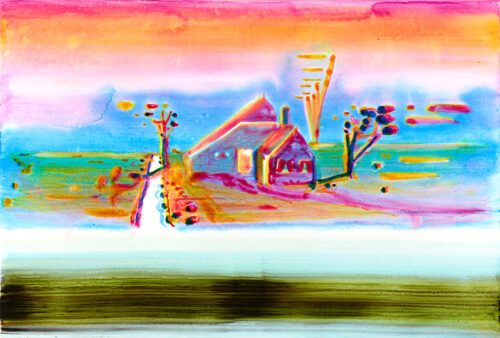 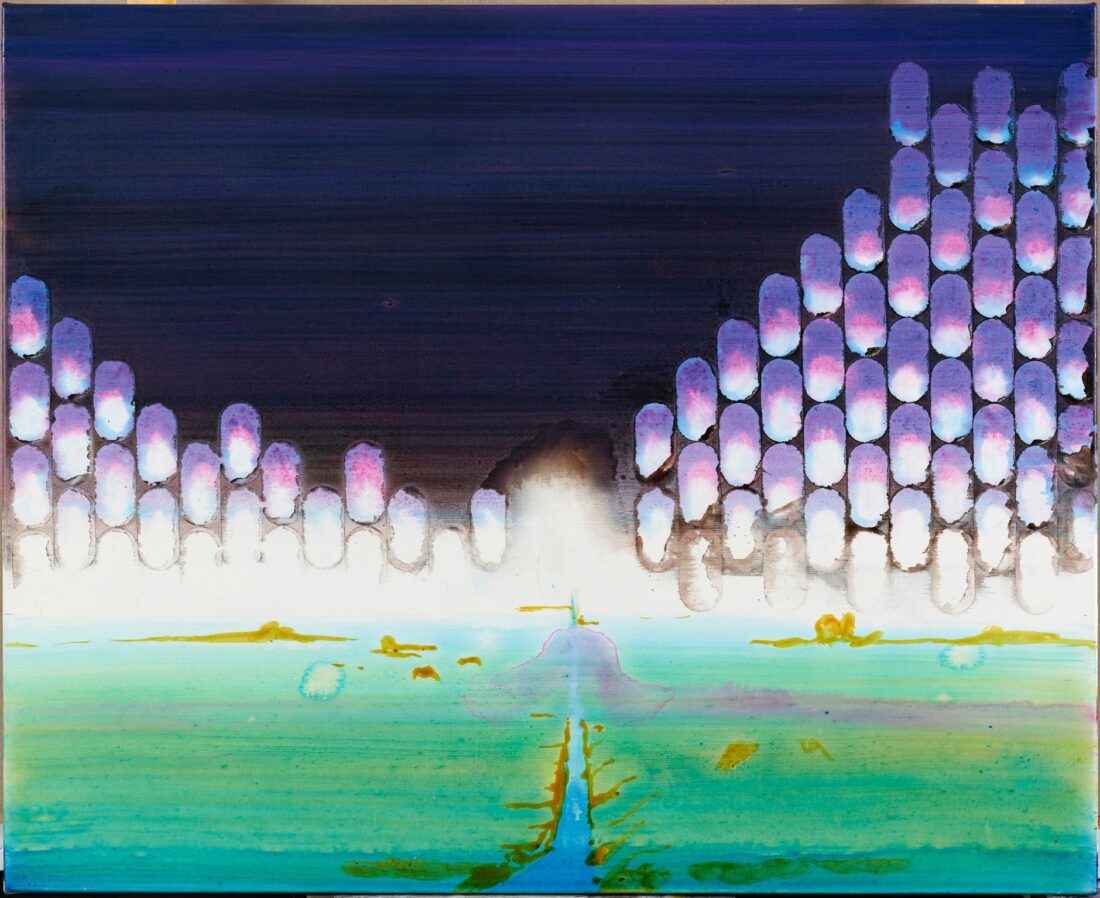 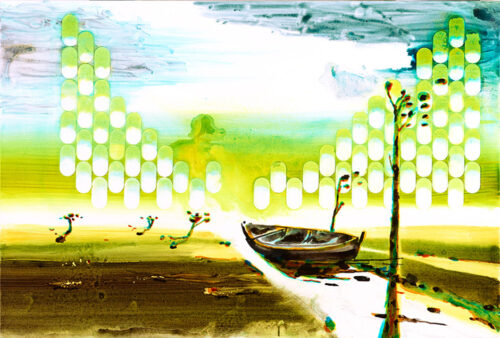 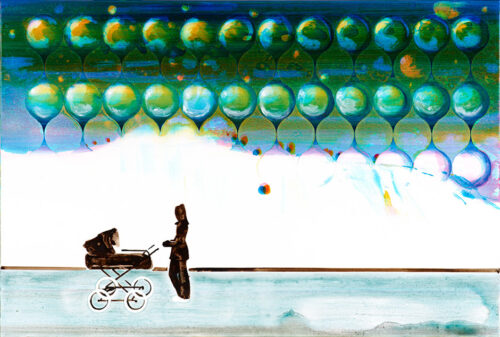