Catalogue raisonné, 2015.
The works from the catalogue was on show throughout 2015 and 2016 at four different museums around Denmark. 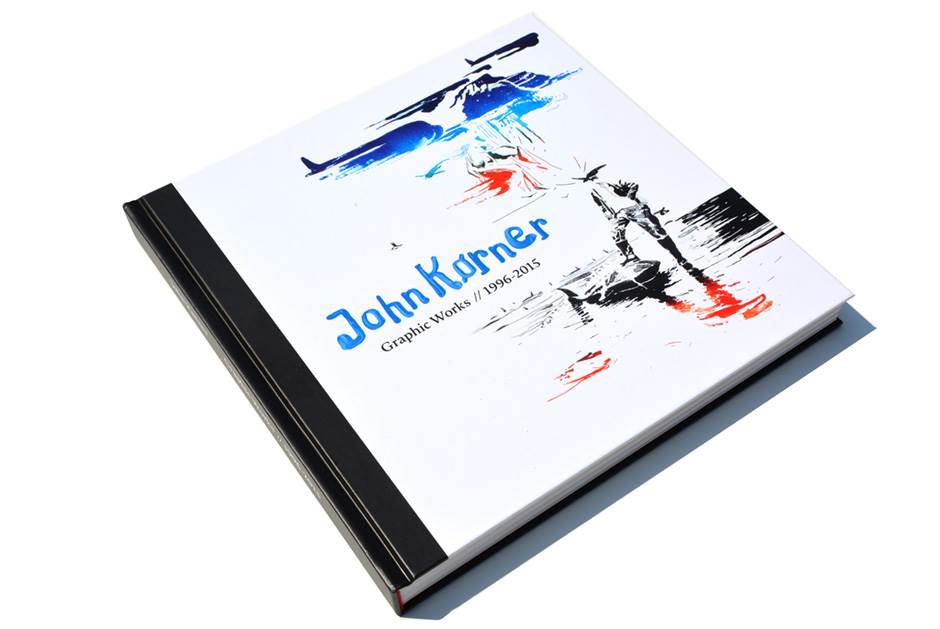 The prostitute, the soldier and the landscape
– the prints by John Kørner

“Tomorrow’s Commitment”, “Great bank – rich in independent personal experiences” are among the titles of graphic works by John Kørner that hang in a glass frame in the kitchen of the artist’s studio in Amager; titles that testify to the existence of a certain social element in the prints – a social element that is also inherent in the nature of prints themselves: they are created on paper, they can be reproduced, and they can be purchased much cheaper than exclusive paintings – three things that also link the print with the democratic project of the artist book. For this very reason, both prints and artist books are often neglected dimensions of an artist’s oeuvre, especially if the artist is a painter like John Kørner. For the exclusivity of painting remains indisputable, whereas paper can be copied, crumpled up and thrown away, or stored and forgotten on private shelves, without those who support art with capital necessarily recording its origins. But it is precisely these qualities of both prints and the artist book that provide greater social opportunities for the dissemination of the artistic project; there is greater accessibility when the exclusivity of the artistic object is replaced by reproduction.

Although prints, in a European context, began as a way of emulating the paintings of the great artists, and thereby communicating their work to a wider audience, the print gradually became an independent form of artistic expression. Copperplate engravings, woodcuts and etchings were particularly popular, and were developed and refined by great artists such as Dürer (1471-1528), Rembrandt (1606-1669) and Goya (1746-1828), who turned the print into an artistic medium in its own right, and whose graphic works are now regarded as treasures.

Although prints are currently experiencing something of a revival through the renewed interest of a number of younger artists in the medium, for many people, prints remain associated with the 1970s penchant for printed materials that were either very colourful or very political, and which were produced in large runs of up to 500 copies. Even today, many summer cottages are still decorated with lino prints and woodcuts in clip-on frames from the decade when prints suddenly became commonplace items.

The interesting thing about John Kørner’s approach to the print is that he embraces both historical approaches; he creates prints that are both colourful and political, but they are treated as treasures and exclusively produced in small runs, and he rejects the clip-on frame promptly and firmly by creating unique, colourful and handmade wooden frames for them. Kørner originally trained at the School of Graphic Arts at the Royal Danish Academy of Fine Arts in Copenhagen, and the medium has thus always been part of his artistic studies and practice. He works with prints in a varied manner, utilising most of the graphic techniques: lithography, engraved copper plates, linocuts and woodcuts, large formats and small formats – often, like his paintings, created in series.

The prostitute, the soldier and the landscape

John Kørner’s motifs are sometimes highly concrete, and at other times more poetic and open. Three of the best-known Kørner motifs depict, as in his paintings, the prostitute, the soldier and the landscape; works which have aroused a great deal of attention and debate, even though they are not new motifs in art, but on the contrary, can be said to be among the most commonly-painted motifs in modern art in general.

One of the first works in art history to really create a scandal due to its shocking portrait of a prostitute was Manet’s (1832-1883) notorious work Olympia (1863) – which, incidentally, was itself a reference to Titian’s famous Venus of Urbino (1538). Despite the mythological title, Manet dared to paint his model as a mortal – even specific – woman who, while she might have been named after a goddess, made no apologetic effort to hide her trade as a prostitute: she unabashedly looks the viewer straight in the eye, without a shadow of shame. Manet’s Olympia was intimidating because she was a bit too close to being a real woman. The same could perhaps be said of Kørner’s portraits of street prostitutes.

However, Kørner’s portraits differ in several crucial respects from their historical models; the woman in Kørner’s works is not naked, she has no face, and she is not elevated to the status of a goddess figure. The titles of the works are simply the names of women, in which the sacral has been replaced by the profane, and the reference to reality becomes concrete. In works like Nikita, Sophia and Paulina (2010), the faceless figure of the prostitute is seen at work on the streets, or in the landscape – but the landscape, for Kørner, is an implosion of the energy that surrounds the figure, and perhaps even an extension of the portrait of her soul, rather than a depiction of nature as such. The final aspect that separates Sophia from Venus and Nikita from Olympia is that Kørner works in series. The figures portrayed are not just The Woman, with a capital W, but a number of individual sex workers at street level. Suddenly the woman is taken from the bed and out into the street, from the sublime down to eye level, and from the idealised, where the (male) observer can enjoy the sight of the inviting treat, to the problematic aspect of the phenomenon’s existence. For Kørner there is no romanticising of the accessibility of fruitfulness, but rather a radical, serial staging of the extent of the problem, showing us a poetic interpretation of a reality that we prefer to ignore.

Something similar applies to Kørner’s approach to the motif of the fallen soldier, who, like the prostitute, is part of a larger narrative in art history. Manet’s equally famous painting The Execution of the Emperor Maximilian (1868) (a motivic reference to Goya’s painting The Third of May (1814)), depicts the Emperor Maximilian being shot by firing squad. Later, around the time of the First World War, war became one of the most widely-utilised motifs in modern art. Many artists volunteered to fight in the First World War: the expressionist paintings of the devastation of war by Georg Grosz (1893-1959) are for example based on his own personal experience. The same applies to the paintings of Otto Dix (1891-1969), such as Flanders (1934-35), which depicts a number of mutiliated soldiers on the battlefield’s tormented landscape of death. One of the 20th century’s most famous war paintings is Picasso’s large Guernica (1937), which portrays the pain and death that accompanied a German bombing in the Basque country. All of these are works that have had a major influence on the legacy of the war in the collective cultural consciousness.

Similarly, Kørner’s War Problems (2009) consists of portraits of named soldiers who fell in the war in Afghanistan. As in the portraits of the street prostitutes, the titles are synchronous with the names of the fallen soldiers. The soldiers, like the prostitutes, are often faceless and frequently painted in a landscape surrounded by gunpowder and explosions – but the horror is not, as for example in Dix, depicted in great detail or unpleasant to look at. Instead, some of these graphic works are almost entirely abstract. The brutal aspect of Kørner’s war works lies, therefore, not in the motif itself, but rather in its direct reference to a specific contemporary event.

Despite the fact that the motif of both the prostitute and the soldier are among the best-known and common in the history of art, Kørner thereby does something radical and new with the motif, allowing it to concretely refer to a current reality, while the figures themselves remain faceless. In this way the concrete element is obscured in his artistic method, and becomes a reference to the fact that the concrete is collective, and the specific is common.

This presence of the tragic (the fallen soldier and the sex slave) is painful to witness, even though the figures are artistic analogies of real people; they are brush strokes on a canvas, lines engraved into a copper plate or cut into a sheet of linoleum. But these works are about human destinies – as poetic references to the lived life, to real existences – and therefore appear strong, sensuous and fateful. The social burden and human solitude are revealed in both the natural and the architectural landscape, even by reference to specific names, through which means the abstract, socially-created problem is made human. These lonely figures in Kørner’s works have an effect on us; they are alone on their mission, alone with their sex trade. In many ways one could in summary say that the aforementioned social elements of the print are such defining aspects of John Kørner’s artistic practice that they cannot be ignored, but that it is precisely in the print that they find a place where the content and the statement, the motif and the method, are congenial.

Selected works will be exhibited at:

Catalogue available at the four museums
and at Bo Bjerggaard Gallery, Copenhagen.

Understanding the Impact of Architecture, 2014